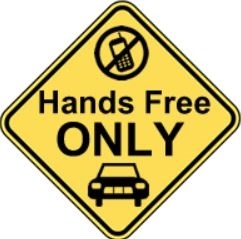 The Hands Free Law goes into effect on Thursday August 1st. Here are answers from the Minnesota Office of Traffic Safety to many questions regarding this new law.

What isn't called out in the article below is how this could impact your insurance coverage.  Most Insurance Companies will view this as a minor moving violation similar to a speeding ticket however some Insurance Companies will view this as a major violation, having the same impact as careless driving or driving under the influence. Be aware that receiving this type of violation doesn't just mean you'll pay a fine, but it will also likely increase your insurance premium.

What can I do under the new law?

The new law allows a driver to use their cell phone to make calls, text, listen to music or podcasts and get directions, but only by voice commands or single-touch activation without holding the phone.

Remember, hands-free is not necessarily distraction-free.

What can’t I do with my phone under the new law?

You may not hold your phone in your hand. Also, a driver may not use their phone at any time for video calling, video live-streaming, Snapchat, gaming, looking at video or photos stored on the phone, using non-navigation apps, reading texts and scrolling or typing on the phone.

Can I ever hold my phone?

Yes. Hand-held phone use is allowed to obtain emergency assistance, if there is an immediate threat to life and safety, or when in an authorized emergency vehicle while performing official duties.

Can I use a GPS navigation device?

Yes. GPS and other systems that can only be used for navigation are exempt from the Hands-Free law. In-car screens and systems are also exempt. In both cases, most of these systems lock when the vehicle is moving.

Is it against the new law to hold a phone in a hijab or other type of headscarf or wrap?

Having a cell phone tucked into a headscarf or head wrap is not against the hands-free cell phone law. The phone must be securely situated to remain hands-free and must not block the driver’s vision in any way.

What would be against the new law is if the driver removed the phone and held it in their hand while they were a part of traffic.

At no time may a driver hold the phone in their hand unless it’s to obtain emergency assistance, if there is an immediate threat to life and safety, or when in an authorized emergency vehicle while performing official duties.

The new law does allow a driver to use their cell phone to make calls, text, listen to music or podcasts and get directions, but only by voice commands or single-touch activation without holding the phone.

If my teen is under 18 years old and has a driver’s permit or provisional driver’s license, can they use their phone in hands-free mode?

The new hands-free law does not change anything for teens under 18 with a driver’s permit or provisional driver’s license: They cannot make or answer calls while driving (hand-held or hands-free). They can use their phone in hands-free mode in the following situations:

Drivers can use them as a conventional watch to check time, but smart watches are considered an electronic communications device under the hands-free law. That means the device has the same restrictions as a cell phone. Drivers can use a smart watch the same way they use a cell phone as long as it’s by one-touch or voice activation. Drivers can’t type, text or do the other things prohibited under the hands-free law.

Is it legal under the new law to stop on the shoulder of the road and hold my phone to make a call, text, etc.?

If it’s not an emergency, stopping on the shoulder of an interstate freeway or controlled access highway is already illegal in Minnesota. Although it is legal to stop along a state or U.S. highway, or a county road, it’s not always safe to do.

We strongly encourage anyone who needs to use their phone to find a safe place to pull off the road completely. A convenience store or gas station, for example, will be safer for you and other road users.

How does the new law apply to amateur radio devices? For example, trained storm spotters sometimes use hand-held and vehicle mobile radios during a weather emergency.

Devices such as amateur radio, two-way radio and citizens band (CB) radio are exempt under the new hands-free law. The law does not define their transmissions as electronic messages, but users are still required to operate them with due care in a safe manner.

Does the new law apply to law enforcement agencies?

Under the new law, hand-held phone use is allowed in an authorized emergency vehicle while performing official duties. However, some agencies have taken a proactive approach to reduce or eliminate hand-held phone use. For example, the Minnesota State Patrol has instituted a policy that requires troopers to use their phones only in hands-free mode.

Unfortunately, there are circumstances in which emergency vehicle drivers need to be on their devices to carry out their duties. Although this is different than situations other drivers find themselves in, the dangers are the same. We're well aware of those dangers from a law enforcement perspective and are encouraging people to follow the law regardless of whether they have an exemption.

Couldn’t I get distracted by my in-car screen or other distractions like eating, grooming, pets, passengers or reading a book? Why aren’t they covered?

Yes, there are many possible distractions when driving, but cell phone use presents a unique and complex challenge and is addressed by the hands-free law. A driver is still expected to avoid other distractions and drive with due care under other Minnesota traffic laws.

Will this make the roads safer?

Yes, in two ways. In 12 of 15 states with hands-free laws, traffic fatalities have decreased by an average

This law will also help law enforcement keep Minnesotans safe. Because drivers aren’t allowed to have

a phone in their hand, it’ll be easier for law enforcement to see violations and take more effective action

Through public awareness and education, the goal is for Minnesotans to comply with the new law without enforcement action.

How to go hands-free (from cheapest to most expensive…)